Enjoy mobile games but overwhelmed by the number of options in apps store? If you’re curious about which mobile games to download, we’ve got you covered.

Battle Camp is a breath of fresh air from the tens, if not hundreds of MMORPGs in the app store. From elegant UI to gorgeous artwork, it is clear that the team behind Battle Camp spared no details.Battle Camp can be divided into three different modes: story, PvP and Boss events. The backbone behind all modes includes collecting, evolving and battling your monsters against another team of monsters through a gem-matching gameplay.

What really separates Battle Camp from other MMORPGs is the sheer depth of the game. There are over 1,200 monsters (fire, wind, water, leaf, rock) and over a hundred virtual worlds where you can team-up complete the story, battle in PvP and so much more. The events are always up-to-date and feature unique bosses for your troop to defeat. There are tons of customization available and the story is far more interesting and engaging compared to similar MMORPGs.


Given the monster catching and social elements of Battle Camp, it is effectively a cross between Pokemon and World of Warcraft. Battle Camp has been in the app store for over two years and has earned respect among among many hardcore gamers given the attention to detail the team puts into this. If you enjoy monster catching and interacting with other players, Battle Camp may just be for you. Download now through the following link:

Mobile Strike is one of the most popular mobile games in the world, as evidenced by its consistently high rank in the app store. In fact, you’ve probably seen their ads of Arnold Schwarzenegger as an Army General. The purpose of the game is to build up your home base (to defend from enemies) and army (to attack enemies). The game revolves around balancing the following elements: construction, resource gathering, troop training and research.

Mobile Strike has everything a hardcore gamer would want - there is A LOT going on. From research to alliances to missions, the game is really designed to fulfill any desire. While this level of detail is certainly impressive, it can also be quite overwhelming for the more casual fan.

If you enjoy base building games where you’ll create and command an army from scratch to take down opponents in virtual warfare, then you’ll likely enjoy this week. If you really want to succeed or are the impatient type, you’ll likely need to make an IAP (or a few) to speed up construction, research, etc but if you’re willing, this game will give you the opportunity to have the best army in the (virtual) world. Download through the following link:


If you play Mobile Strike, Game of War - Fire Age will feel extremely similar. In Game of War - Fire Age, you play the part of a king, attempting to build the most powerful kingdom possible in the world full of other players with the exact same goal. The game is set in a medieval fantasy setting. Your focus as a kind is in building and upgrading structures. Similar to Mobile Strike, the actions you take in the game revolve around gathering resources, creating troops, research, defending your home base and attacking enemy bases.

Besides the setting, another major difference with Mobile Strike is that this game is filled with much more hardcore players. As listed on Venture Beat, Game of War paying players spend an average of $550. Thus if you want to move up in the virtual world, you’ll likely have to pay up. Download through the following link:

If you’re a fan of dragons, Dragon City Mobile is for you. You raise them, feed them, breed them, give them habitats and ultimately, pit them against other dragons. The ultimate goal of the game is to collect all of the 500+ the dragons in the game. The game features over 80 million users making it one of the largest MMORPGs on this list.

Ultimately, Dragon City Mobile is THE game for dragon lovers. Download now through the following link:

If you get tired of breeding dragons in Dragon City, then try the latest game from Social Point - Monster Legends - which takes the formula from their original hit but changes the theme to apply all sorts of strange and mysterious monsters. In Monster Legends, your goal is to collect monsters and make them stronger to defeat “bad” monsters. The game involves a breeding element as you can only increase strength of your monsters through breeding different combinations.  Once the monster squad is assembled, players will be ready to fight in adventure mode or compete against other players in the arena. As you learn more about the various monsters in the game and the breeding techniques that are available, you can develop stronger and stronger teams to help you climb the player rankings.

Monster Legends is definitely a game that packs in a huge amount of content and with the regular updates always giving you a new monster to try and breed successfully, it is truly a game that you can commit to playing for the long term.

Monster legends doesn’t reinvent the breeding game genre but provides a lot more depth than most games in this space. With Social Point behind the game you can also be sure that it is only going to get better over time with consistent and engaging updates. 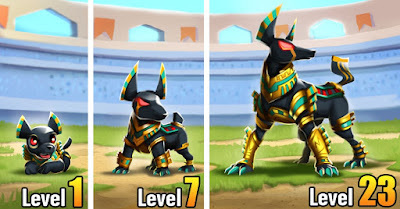